Home » Personal » Ko Samed – Into the Heart of Darkness

So there the two of us were, clinging for dear life as the speed boat raced into the darkness of the Gulf of Thailand. Our pilots were two Thai teenagers, one 15 and the other no older than 11.

After about a quarter hour of sailing into near total blackness, the older boy surreptitiously cut the motor, setting the boat to glide. He turned in his seat, pointed towards our bags and said, “Get out.”

Our trip had begun that afternoon in Bangkok. We boarded a bus bound for Rayong, the home of a ferry which would take us to the island of Ko Samed, our final destination. We arrived late. The last ferry had already departed.

Undeterred, we hooked up with a cab driver who promised an alternative. He whisked us a couple miles out of town to a smaller dock punctuated with a long, ramshackle ticket counter lit with a handful of fluorescent lights.

“Ko Samed,” we asked. The two proprietors debated with each other what to charge us. The price was too high. We accepted anyway.

“Get out.” With our bags over our heads, we did as the boy asked. Lacking recourse, we plunged faithfully into the water which rose to our chests. The younger boy motioned towards dim lights in the distance. “Ko Samed,” he said.

In a flash, they were gone. Bags held high, we waded in, emerging on the shore of Jep’s Beach (and Restaurant). As the two wet Americans emerged out of the ocean, luggage in tow, several diners glanced up. Within moments, they had returned apathetically to their beers. 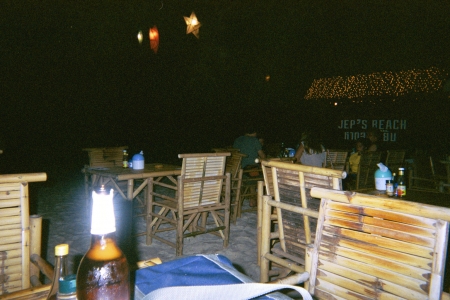 The preceding account is a travel story I submitted to Afar.com. It took place in January 2004. For more photographs from this trip, visit my Southeast Asia photo gallery.