Big Oil execs and their political counterparts love to sing the praises of the domestic oil sector.  They argue that the industry unleashes “job-creation activity” and will generate up to one million new jobs by 2018, according to the American Petroleum Institute.   They argue that increased domestic production will “enhance our energy security” by maximizing the quantity of liquid fuel obtained from “secure” North American sources.  Sen. Kay Bailey Hutchison (R-TX) stated in a GOP weekly radio address, “Tapping our own vast resources will help lower energy costs for Americans, add high-paying jobs to our economy, and strengthen our security for future generations.”

The danger here is that many Big Oil advocates have defended expanded drilling and deregulation in pursuit of jobs and security without realizing that, unfettered, the oil industry will instead pursue its primary goal, profit.  In instances where these ideals run counter to each other, “pro-oil” policies intended to create jobs and security can more than just miss their target.  They can be directly counterproductive.

Consider a NY Times story published on September 27 (In North Dakota, Flames of Wasted Natural Gas Light the Prairie) which reports that petroleum outfits operating western North Dakota’s Bakken shale field are unintentionally releasing natural gas during the oil extraction process.  The industry has claimed that the infrastructure needed to capture the gas is expensive and has chosen to burn it off instead, a process known as flaring.  An estimated 30% of all natural gas produced in the state, the annual carbon equivalent of a medium-size coal-fired power plant, is combusted in this manner. 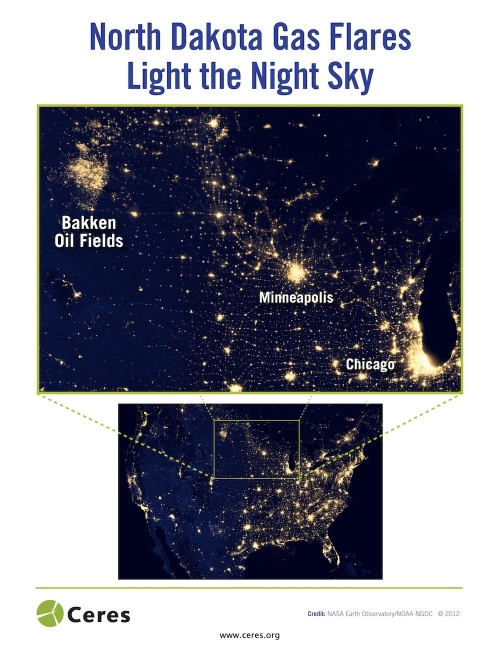 There are no federal regulations against flaring and none are expected any time soon.  State governments have greater flexibility, but North Dakota has made no indication that it will act to restrict the process.

Let’s first examine how this fits into Big Oil’s jobs narrative.  In the case of the Bakken shale field, petroleum operators have a genuine opportunity to put people back to work creating, transporting, installing, and operating the infrastructure required to capture the available gas reserves.  But because collecting these natural gas resources fails to optimize profit, they have opted against it.  Now this is not to say that capturing the Bakken field’s natural gas reserves makes the entire enterprise unprofitable.  It simply makes it less profitable, and they view this as an unacceptable cost even if it creates jobs.

The simple truth is that the oil industry is not the engine of job growth that many advocates claim it is.  Between 2005 and 2010, ExxonMobile, BP, Shell and Chevron combined to reduce their US workforce by 11,200 while simultaneously raking in $546 billion in profits.  They, along with ConocoPhillips, followed up that performance in 2010 by shedding another 4,400 jobs amidst profits of $73 billion.  They reinvested a paltry 1.2% of their profit in alternative fuels R&D and instead chose to buy back their own stock, enriching their board of directors, senior executives and shareholders in the process.

Then there is the claim that “pro-oil” policies enhance domestic security.  In pursuit of greater domestic energy supply, the United States is presently promoting a wide array of risky fossil fuel acquisition projects.  The risks are warranted, so the argument goes, because maximizing our domestic supply of liquid-fuel energy is too important to sacrifice.

For example, Congress has failed to pass a single piece of legislative reform in the wake of last year’s Deepwater Horizon disaster (which killed 11 people), yet will allow BP to resume offshore drilling in the Gulf of Mexico.  There is no proven method to clean up an oil spill in icy Arctic waters, yet the US has issued leases which will allow Royal Dutch Shell to explore for oil in Alaska’s Beaufort Sea.  TransCanada’s proposed Keystone XL pipeline would pump over 500,000 barrels of highly pressurized tar sands per day straight through the American Heartland (an amount large enough to be “game over” for climate change according to one prominent climate scientist), yet the US government seems primed to approve it despite the risks.

The list goes on, but the essential point is that Big Oil and its government supporters expect Americans to suffer significant environmental and health burdens in defense of maximizing our domestic energy supply.  These are public costs worth bearing, they argue (if they chose to acknowledge them at all), in defense of the greater good.  Yet when the North Dakota oil firms are presented the opportunity to absorb their fair share of the cost in defense of our natural gas reserves, they balk.

The case of Keystone XL is particularly emblematic of profiteers’ other tactic, blatant distortion of the facts.  Cindy Schild, a refinery manager with the American Petroleum Institute, has defended the XL by arguing that “it will be a part of the nation’s energy future” without which “the oil will be shipped to other countries.”  What she fails to mention is that a full three-quarters of the tar sands have already been contracted out to five foreign companies and one domestic, Valero, whose business model is geared towards export.

Make no mistake, “job creation” and “energy security” are little more that thinly veiled justifications for policies designed to maximize corporate oil profits.  It is this obsession with profit that explains why taxpayers are needlessly lavishing oil companies with tens of billions of dollars in subsidies.  It explains why Americans are being placed in danger by weakened environmental standards and by refusals to strengthen pipeline safety rules.  It explains why some politicians have even supported shutting down the Environmental Protection Agency.  It’s the same reason companies like Exxon deliberately spread misinformation about the veracity of human-driven climate change and why oil billionaires like the Koch brothers support bogus studies discrediting offshore wind farms.

If politicians are truly concerned with creating jobs and increasing security, then the status quo of coarsely and broadly liberalizing the oil industry must be abandoned in favor of narrowly focused policy goals.  Require that natural gas in the Bakken field be collected, not flared.  Place a price on carbon pollution, which would level the playing field with other emergent sectors critical for energy security, like wind and solar.  Empower the Environmental Protection Agency to protect our water and air as much as our energy supply.

Until then, the fact remains that North Dakota is on fire, energy resources are being squandered, jobs lie fallow, and at least two million tons of carbon dioxide are being released into the atmosphere each year.  Big Oil will persist in telling us they are interested in creating jobs and preserving security.  If only it weren’t a bunch of hot air.