Home » Astrophysics » My Astronomy Booklet Has Been Published!

I’m published again! I was informed just last week by the National Academy of Sciences in Washington, DC that 2020 Vision: An Overview of ‘New Worlds: New Horizons in Astronomy and Astrophysics’ was fresh off the presses! And today my copies arrived in my mailbox!

Ok, so let me explain. During my time as a science policy fellow at the National Academies, I was asked by the Board on Physics and Astronomy (BPA) to develop dissemination materials for the Astro2010 project. Astro2010, otherwise known in the astronomy and astrophysics community as “the decadal survey”, is a once-per-decade effort to identify the discipline’s “big questions”. 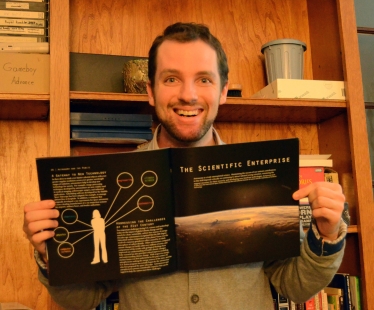 Are there other planets like Earth? Is there life on them? How did the Universe inflate and why is dark energy ripping it apart? What’s going on inside galaxies, how do they evolve, and how will their stars die? Pretty exciting stuff.

Each decadal survey is a tremendous accomplishment. Over 100 of America’s premier astrophysicists from a wide range of fields were selected to populate nine expert panels. These panels were asked to consider hundreds of white papers submitted by other members of the astrophysics community, each one weighing in on where astrophysics should be headed.

Five Science Frontier Panels (SFPs) were charged with summarizing the state of their specialties and identifying research themes for the upcoming decade. Those panels were:

Four Program Prioritization Panels (PPPs) were asked to figure out what telescopes, instruments, and programs were needed to reach those goals. This step is particularly important and differentiates the astrophysics community from many others. Astronomers tend to be very realistic about the expected budgets of their main funding agencies: NASA, the National Science Foundation (NSF), and the Department of Energy (DOE). They rank their top priorities based upon their costs and scientific merit and these recommendations go a LONG way towards determinimg which projects actually get funded by the government.

Each SFP published its own in-depth report whose results were summarized in the main deliverable, New Worlds, New Horizons in Astronomy and Astrophysics, aka the Astro2010 decadal survey. The final product also includes sections on astronomy and the public, international research efforts, and other important topics.

During my first week as a policy fellow I was asked by the chair of the BPA to think of a way to communicate this huge survey to the general public. I’ve done a lot of teaching and arguing at people so I felt this was right up my alley. I began brainstorming with our division’s new communications associate, Shannon, on all sorts of ideas. In one gem, I suggested a series of podcasts that would have featured Neil deGrasse Tyson (himself a committee member) bantering with a stand-up comedian about a new topic each week. I began conceptualizing Astro2010 toys that could be placed on people’s desks. During the day they’d fiddle with them mindlessly and astrophysics would enter their brains through osmosis or something. These were some true top-flight suggestions.

In time they settled me down and we went the conventional route of writing a summary booklet that could be given out to teachers, kids, parents, that sort of thing. I had browsed through the previous decade’s effort and was thoroughly unimpressed. The layout was weird, the themes were muddled and someone had decided that enlarging blocky, low-resolution images was ok. (Note, this is nearly never ok. Blowing up 8-bit video game characters for nostaglic appeal is an uncommon exception.)

So I set myself to painstakingly reading through every page of the survey until I felt I understood the Platonic form of the report, a sort of principle components analysis of themes. I felt it was most important that readers get an excellent sense of where astrophysics was at and where it was going. This compelled me to summarize all the SFPs through a series of 10 questions. Then we described the proposed instruments, the connection between astronomy and the public, and finally the modern astrophysical enterprise. The result was this Ã¼ber-thick milkshake of an outline, the type where you add punctuation and it’s practically written.

Our board then brought on Hugh Van Horn, a retired scientist and freelance writer to bring the outline to life. We bounced drafts back and forth for a few weeks asymptotically approaching something we both liked. I suggested a collection of images for the booklet (thanks personal obsession with Astronomy Picture of the Day!), and lo and behold most of what we imagined made it into the book unmolested.

I had originally suggested that each question be associated with a simple logo, a la the opening segment of Tosh.0, that could be linked with additional web content. Shannon’s aesthetic sense prevailed, however, and she adopted our structure into the very sleek, black-based design in the final document. I think it looks great!