Tucked away at the bottom of a small hill in a distant corner of Johns Hopkins University’s Homewood campus is a large brick building.  Metal pipes protrude horizontally from its side before diving perpendicularly into the ground.  Its tall, curved top windows, rooftop smokestack and mysterious purpose are vaguely reminiscent of the factory from the classic 1971 film Willy Wonka and the Chocolate Factory.  And much like the Wonka factory, no student ever goes in and no student ever comes out.

This building is the Homewood Power Plant, the facility responsible for providing electricity, heating, and cooling to the Homewood campus in central Baltimore City.  As part of Earth Week @ Johns Hopkins, the university’s Department of Facilities Management granted me a walkthrough to learn exactly what happens within.

The JHU Power Plant plays the same role as an electric utility’s generation station.  Fuel goes in and electricity comes out.  BGE, Maryland’s electricity provider, achieves 35% efficiency in this process.  What this means is that for every 100 units of fuel energy that goes in, 35 units of electricity comes out.  The remaining 65 units are expelled as waste heat through the Chesapeake Bay Cooling Tower.

Principles of thermodynamics and engineering limitations make it difficult to achieve higher efficiencies.  This is unless, of course, you manage to reclaim that waste heat for something useful.  This is where Homewood’s Cogeneration Facility comes into play.  Cogeneration (which stands for Combined Heat and Power System) is a process in which both electricity and useful heat (steam) are simultaneously produced.  The 65 units of waste heat, which would otherwise be discarded, are diverted to a waste heat recovery system. 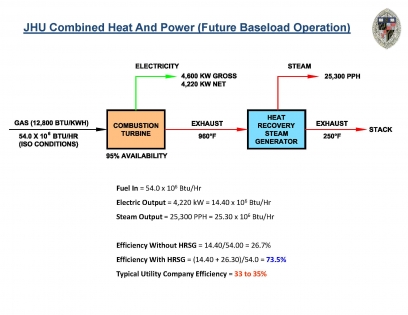 Here are the basics.  Waste heat in the form of steam exits the primary generator at temperatures around 1000 °F.  The recovery system takes that steam and pumps it around the campus, eventually taking the form of building heat, hot water, and energy to feed Homewood campus’s four chilling plants.  All in all, the waste heat recovery system is able to wring about 45 extra units of steam energy from the 65 units of waste leading to an overall plant efficiency of 75-85%, approximately double what BGE could provide.  (For you wonks out there, the total electric capacity of the system is

kWh/year and total steam capacity is 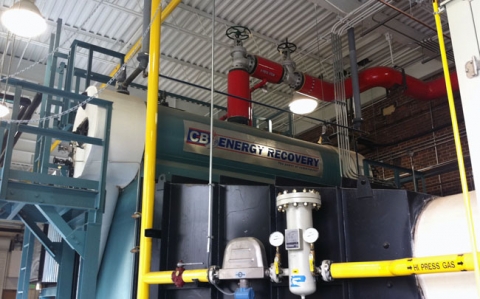 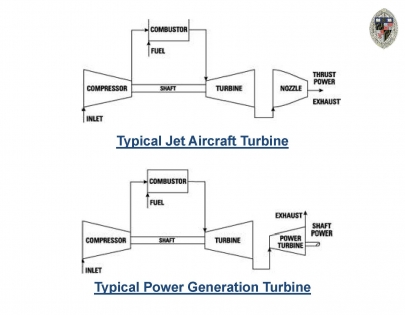 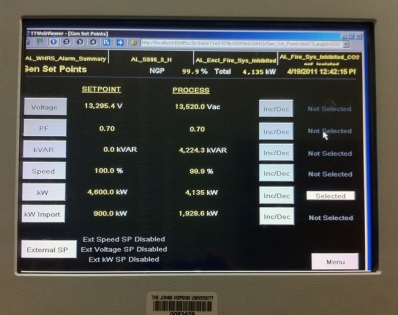 The 4.2MW Power Plant, which opened in June 2010, is part of JHU’s plan to reduce its greenhouse gas emissions by 50% in the next 12 years.  “Our approach has us looking at energy efficiency, energy conservation, more sustainable energy choices and renewable energy,” added Mr. Kirk. 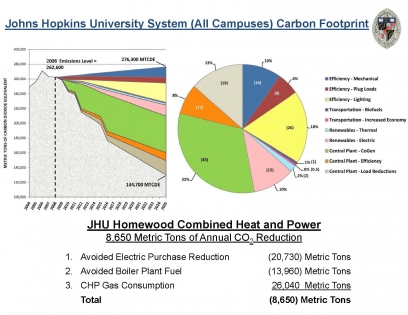 If this system seems like a no-brainer, then why doesn’t BGE do it itself?  The problem is that piping steam over long distances is an incredibly inefficient operation.  Much of the steam’s heat will be lost in the process.  That’s not to say utilities don’t do it.  It’s just that circumstances have to be right.  For example, Con Edison, New York City’s utility provider, uses a collection of cogeneration plants to heat around 100,000 densely packed buildings in Manhattan.  This explains the familiar image of steam rising through city sewer grates.  It also explains why cogeneration plants must be closely located to end-users.

The Homewood cogeneration unit joins a small handful of others in the region.  Two have been installed at Johns Hopkins Hospital and a couple others are at the University of Maryland at College Park and Mercy Medical in central Baltimore.

The limiting factor prohibiting everyone from installing cogen plants is cost.  The Homewood campus was fortunate in that it had a large, unused space directly above one of its on-site combustion turbines.  The facility cost $7.5 million to install and will pay for itself in energy savings in about seven years. 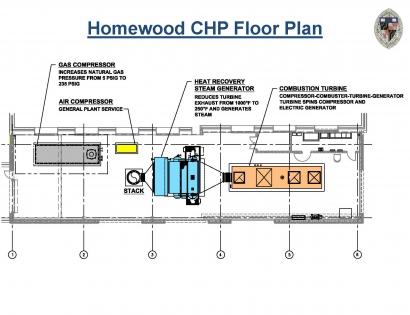 Despite the plant’s net energy savings, this project was not always economically viable.  It was Maryland’s deregulation of electric utilities in 1999 that turned the tide.

“When electricity was deregulated, electricity prices rose,” said Craig Macomber, Chief Engineer at the Power Plant.  “At the same time, natural gas prices were falling.  These two conditions made our project feasible.” 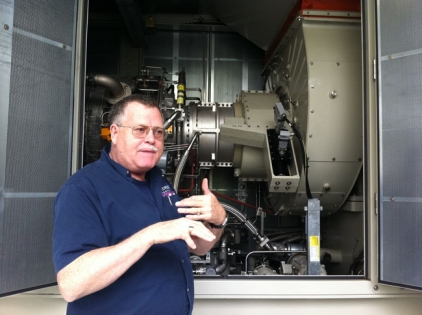 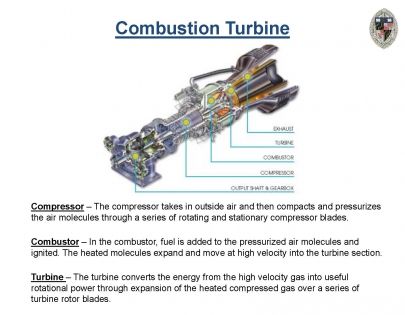 The Homewood campus remains reliant on electricity purchased from BGE.  According to Mr. Macomber, when all things are considered the total amount of Homewood’s energy generated by the power plant is 20% in the summer and 30% in the winter.

Increased energy efficiency will lower the university’s carbon footprint by 8,650 metric tons per year, important for mitigating global climate change.  This falls in line with the goals of the JHU Office of Sustainability, whose stated mission is “to make Johns Hopkins University a showpiece of environmental leadership by demonstrating smart, sensible, and creative actions that promote the vision of sustainability.”